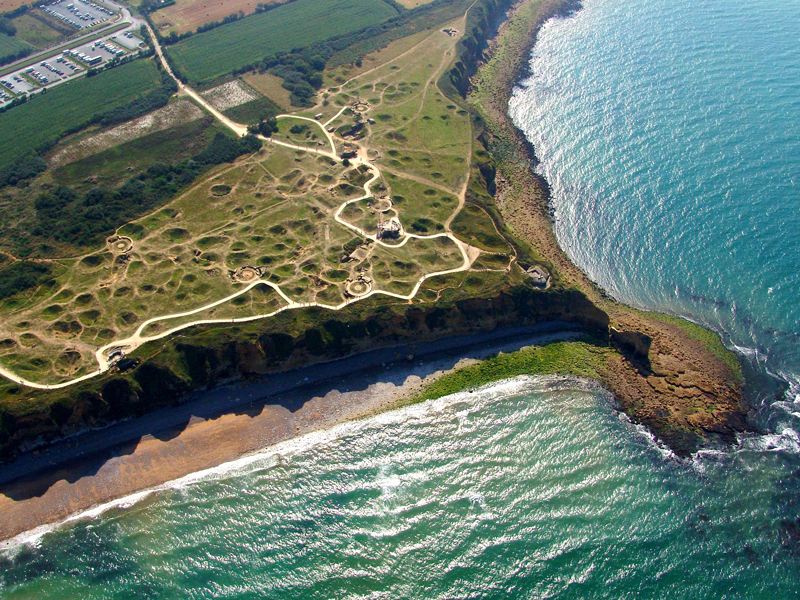 The 2nd and 5th Ranger battalions commanded by Major James Earl Rudder were tasked with scaling the cliffs of the point and destroying the guns that were thought to be there posing a threat to the landings at both Utah and Omaha beaches and the fleet offshore.

An air force bombardment had begun at 00.30 and 4000 tons of bombs had been dropped on the point by the RAF and USAF. From 05.30 the USS Texas had continued the shelling to keep the Germans in their bunkers.

The plan was for half of the 2nd Rangers, with Rudder, to land precisely at 06.30 just as the last shells from the Battleship Texas were hitting the point. The 5th Rangers and 2 companies of the 2nd would stand out to sea as a floating reserve while Rudder and his men scaled the cliffs before the Germans had time man their defenses. Once atop the cliffs Rudder would issue the code word for the floating reserve to follow. Should Rudder no code word be received by 07.00 the plan was for the reserve to move down to Omaha, land and move by land to the point and attack it from the rear.

As they approached the shore Rudder realised too late that the Coxswain’s had mistaken Point de La Perce for Point du hoc which was now 2 miles to the west. Rudder had the craft alter course but given a strong adverse current it took some 40 minutes before they arrived at the base of the cliffs 07.10. By now the reserve had gone to plan ‘B’.

The Texas meanwhile had lifted it’s bombardment of the point onto its pre arranged secondary targets. The Germans thus had enough time to man the cliff edges and commence firing on the advancing Rangers. At this point the commanders of the USS Satterlee and HMS Talybont realising the predicament came steaming close in shore and opening their secondary armaments on the cliffs drove back the German defenders. Taking only 15 casualties the Rangers moved through the point but realised that the ‘guns’ in the large emplacements were fake – in fact they were telegraph poles. The lighter more portable artillery were also not there.

As the Rangers pushed through the defenders Sgt’s Leonard Lomell and Jack Kuhn emerged from a long slit trench and saw drag marks in the grass moving off to the west. They followed them to a sunken lane and peering into the field beyond they saw the guns – with the crews mustering on the far side. Thinking quickly the Sgt’s took out there Thermite grenades and immobilised the guns without the Germans even realising. By 10.00 Rudder had the point, had destroyed the guns and was holding.

However he was not relieved as expected that day nor the next – relief came only on the morning of the 8th June. In holding the point against vastly superior German counter attacks for two days, without relief or reinforcement, Rudder lost 120 men of the 200 men that scaled the point and was, when finally relieved, using German arms and ammunition to cling on to the beach and cliff.