On day one of our D Day tours we visit the site of where Lt General Wilhelm Falley, commander of the 91st Luftland division, was ambushed by 82nd airborne paratroopers early on the morning of June 6th.

On that June morning in Normandy a small band of mis dropped and lost paratroopers commanded by Lt Malcolm Brannen had stumbled across a small mill and having woken the owner Brannen was trying to locate their whereabouts by showing a map to the startled mill owner. Just as he had made the discovery of where they were an urgent whistle was heard from the scouts he had placed further up the lane. The warning had the paratroopers scattering for cover as a car was heard approaching at speed.

As the staff car sped toward them the Paratroopers opened up a withering fire from Garand rifles, M1 carbines and Thompson sub machine guns. They riddled the vehicle which initially swerved to the right, bouncing off the field boundary stone wall before veering across the lane and crashing into the gable end of the – mill shown just behind me in the photo.

Falley was dead, the driver miraculously unhurt and Major Joachim Bartuzat, Falley’s second in command was thrown clear and was laying in the road. Before him was his Luger pistol which he may have been taking from its holster as the vehicle impacted the wall.
Bartuzat was shuffling on his back towards the weapon whilst saying in English ‘Don’t kill, don’t kill’. Brannen from a distance of less than 16 feet fired his .45 pistol and dispatched Bartuzat with a single bullet to the head.

The vehicle and bodies stayed where they were for several days and the aerial photo shows the scene on the 9th June, the bodies have been removed but the staff car still rests where it crashed at dawn on the 6th June into the gable wall of the mill.

Several clips of ammunition must have been fired at the car and I had thought for some time that given M1 rifles and Thompson sub machine guns eject a lot of fired cases quite some distance there might be a chance some of these were still there. 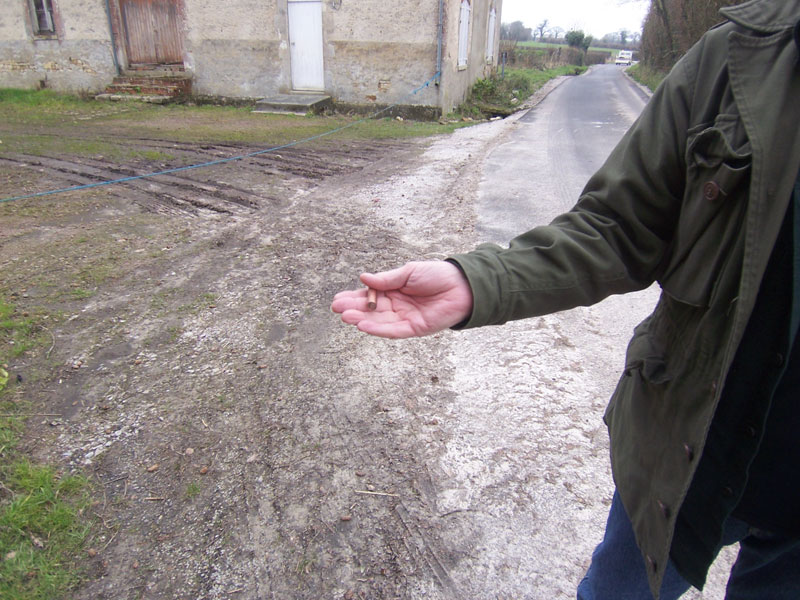 With this in mind I went there a couple of weeks ago with a metal detector and within 5 minutes we found several spent cases. The one I’m holding is from an M1 Garand.

Now I don’t know if this is the actual one that killed the General – but it was certainly fired at him on that morning as no other action took place on this stretch of road.

It is an odd feeling every time one finds artefacts from the D Day conflict – knowing that the last person to handle or see that particular item was fighting in the Normandy battlefields on D Day and now 70 years later you are handling that same item.