Graignes – one of the worst miss drops of US paratroopers on D Day.

Just after 02.00 on the morning of June the 6th 12 planeloads of 3rd Battalion 507th paratroopers were dropped over 15 miles from their drop zone of Amfreville into the flooded marches within striking distance of the small village of Graignes.

Initially 25 troopers under Captain Leroy D. Brummitt entered the village and by late afternoon 187 82nd airborne paratroopers had entered the village and with the approval of the villagers had set up defensive positions. Major Johnson arrived later on June 6th and took over command and ordered a substantial perimeter defence set up. For the next three days much time was spent, with the help of the villagers, pulling in ammunition bundles that had dropped in the marsh and they amassed a substantial stockpile of ammo for their .30 machine guns and mortars.

Up to this point little had been seen of the enemy until the afternoon of the 10th June when a mechanised German patrol approached the perimeter and 1st Lt Mum’s B company men opened fire killing four of the Germans.

On Sunday the 11th Major Johnson gave permission for men to attend service in the church but ten minutes into Mass firing from the south of the village rudely interrupted Father Leblastier and a woman burst into the church yelling, “The Germans are coming! Save yourselves!”
A German patrol had managed to penetrate to within two hundred meters of the church and caused panic among the assembled parishioners. Marthe, a villager, remembered that, “Everybody started to run away but they started shooting, so we had to stay inside the church” and the villagers huddled inside the nave of the church just to stay out of the way of the flying bullets.

The assault lasting just ten minutes had been an uncoordinated effort in which the paratroopers had inflicted staggering casualties on the attacking force. From the belfry of the church German soldiers could be seen picking up their dead and loading the wounded into trucks. As soon as the fight was over, Maj. Johnston ordered all available personnel to man the defensive line around the village. He correctly recognized that the morning attack had only been a probing action and that another assault would soon follow.

1400 hours June 11th. The Germans commenced a punishing mortar bombardment of Graignes followed by a second infantry assault against the paratroopers defensive line and moving rapidly they almost breached the line at one point. But Capt. Brummitt quickly moved men to meet the threat and sealed the perimeter. Once again, the paratroopers’ mortar and supporting fire were decisive factors in inflicting losses as scores of enemy infantry were cut down in the paratroopers well positioned and interlocking crossfire. However they had not escaped casualties and during this second attack both paratroopers and the villagers sufferd casualties.

The church was transformed into an aid station as the wounded were pulled back to receive medical attention from Capt. Sophian. The two priests Father Leblastier and Father Louis Lebarbanchon (a Franciscan priest temporarily assigned to Graignes) provided comfort to both wounded paratroopers and villagers. They were helped by the rectory’s two housekeepers, eighty-year-old Eugenie DuJardin and Madeleine Pezeril – an act of humanity for which they would all pay dearly.

Quiet fell over Graignes after the second attack and Maj. Johnston pulled in his outposts reducing the defensive and assessed their situation. After the morning’s fierce fighting ammunition was running low and Johnston redistributed the remaining small arms ammunition and mortar rounds among the defenders to provide each position with an even supply. Shortly the sound was heard from the hedgerows around Graignes of heavy vehicles and he realised the Germans were bringing in reinforcements. Mindful of the civilians in his midst Maj. Johnston sent all of the villagers away and given they’d been trapped in the church for 9 hours during the day’s fighting the Rigault sisters (Marthe and Odette) were “ready to leave” and they returned to their home at Le Port St Pierre.

Death of Major Johnston
In Graignes the imminent last action seemed to be getting nearer as through his binoculars, 1st Lt. “Pip” Reed could see two German 88mm guns being set up on a farm located just a few kilometers away on the heights of nearby Thieuville.
At about 1900 hours, the 88s opened fire on Graignes and incoming rounds pounded the village, hitting the school and the town square and shells landed all around the church. Lt. Farnham was in the belfry and was speaking to Lt. Naughton on the field phone when an 88 slammed home and the belfry took a direct hit and the line just went dead. Ripped through the belfry observation post the 88 killed Farnham and his assistant observer. It was during this phase of the bombardment that Maj. Johnston and Lt. Maxwell were killed when an 88 mm round tore into the command post and exploded, killing both men instantly.

Mortars and the 88s rained down on Graignes and then German infantry moved in for the kill. This reinforced assault force was possibly twice that of the afternoon battle and without an observation post in the belfry it was not possible for the paratroopers to accurately target their mortars against the enemy with any degree of accuracy. The mortar crewmen fired their rounds at maximum elevation in a last desperate attempt to stop the German infantrymen.

As darkness fell the Germans made the final thrust into Graignes and the defenders were now reduced to a few isolated pockets of resistance thinly spread out around the village. In many cases men were out of ammunition and the Germans were quick to exploit this and overran the outer perimeter and were soon moving into the streets of the centre of the village.

With the Germans swarming over the centre of the village, the American situation in Graignes was untenable. Capt. Brummitt ordered the men to pair off and slip into the marais and to try to make it to either Carentan or Ste.-Mère-Église. The wounded would have to be left behind and taken prisoner as there was no means of spiriting them away. With that, paratroopers in loose groups began slipping away from the village and into the night. 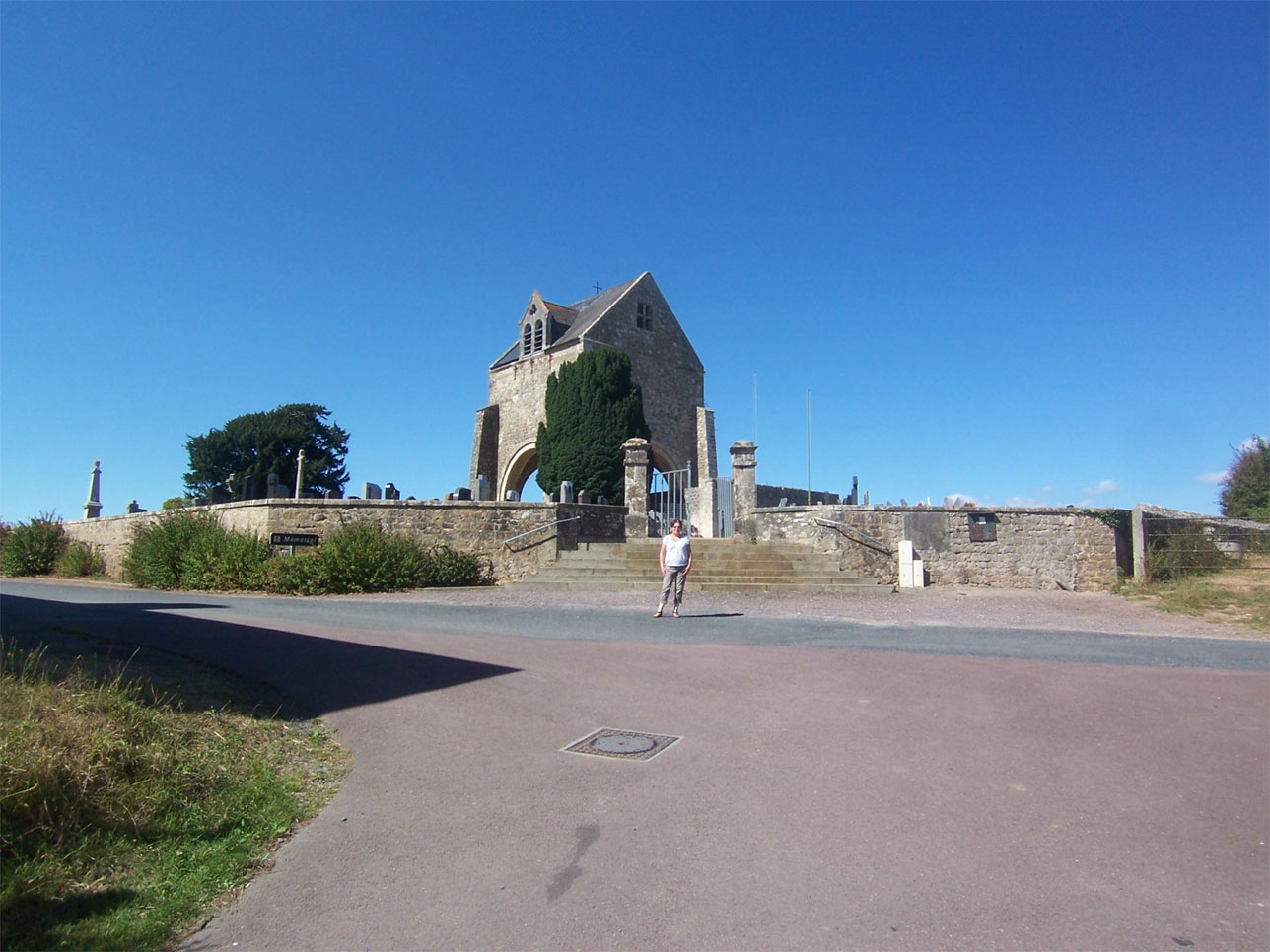 The 17th SS Panzergrenadier Division, Götz von Berlichingen, was a regimental sized force of approximately 2,000 combat soldiers giving odds of ten to one in the Germans’ favour. Despite such odds the 182 defenders of Graignes caused an estimated 1100 hundred casualties on the Germans, killed and wounded, during the course of the fighting on the 10th and 11th.

This stubborn little band of paratroopers inflicted such high losses on the 17th that it brought upon the wounded and the village a vicious and brutal reprisal.

Storming the church the 17th SS found Capt. Sophian’s aid station and they were taken outside and divided into two groups. One group of nine paratroopers was marched off four kilometers to the south, near the village of Le Mesnil Angot, forced to dig a pit and the SS shot each one of them in the back of the head and dumped their bodies into it, one atop of the other.

The second group of five troopers fared no better. They were marched to the edge of a shallow pond behind Madame Boursier’s café where the SS bayoneted these wounded men and threw them into the water.

With the Americans being led off to execution the Germans rounded up civilians suspected of assisting the paratroopers and a group of SS men proceeded to the church rectory intent on revenge.

Bursting into the rectory they dragged Father Leblastier and Father Lebarbanchon into the courtyard and shot them both. Madeleine Pezeril and eighty-year-old Eugenie DuJardin had been cowering in their quarters ever since the beginning of the final assault and the Germans shot and killed both women in their beds.

On Tuesday the 13th, the Germans burned the village. They poured gasoline over the bodies of Father Leblastier, Father Lebarbanchon, Eugenie DuJardin and Madeleine Pezeril and then set them on fire. The ensuing blaze was allowed to burn out of control, destroying 66 homes, the boys’ school, Mme. Boursier’s café and the 12th century church. Another 159 homes and other buildings were damaged either as a result of that fire or the fighting. Before the 11 June battle and the German retaliation that followed, the village of Graignes had consisted of just over two hundred dispersed homes and other structures. Afterward, only two houses survived unscathed.

The fighting stand made at Graignes by the brave men of the 507th PIR stopped the 17th SS Panzer Grenadiers in its tracks, reduced its fighting strength and delayed ultimately its arrival in Carentan thus helping the defence by the 101st Airborne Division.