Click on any of the highlighted titles to view more about each part of the tour.

Our Tours are usually of either 1 or 2 days duration

Arriving in the late afternoon our guests, after unpacking usually meet downstairs for a glass of something or other to help blow away the ‘dust’ of their trip. Read More…

Later your evening meal is taken in our large farmhouse kitchen and usually forms four courses with an aperitif in the form of a glass of Kir Royal to start and of course there is also wine during the meal.

After dinner we can retire to the main sitting room (in the darker months with blazing log fire) where the plan of campaign for the following day can be discussed.

Before bed perhaps take a walk around the 1st floor ‘Armoury’ where some of the artefacts on display range from rifles, US equipment, fragmentation grenades to German field cutlery!

This is an opportunity to handle some of the firearms and items on display – very popular with the boys of all ages! 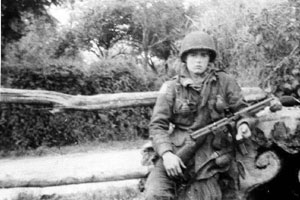 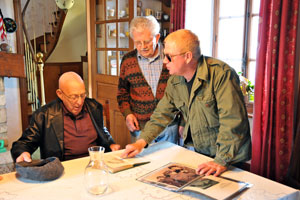 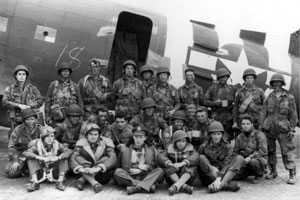 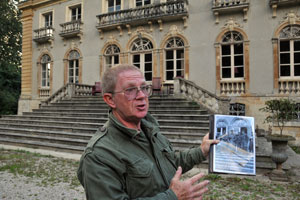 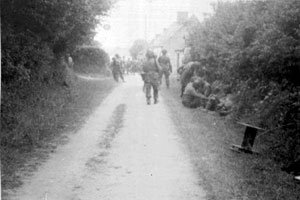 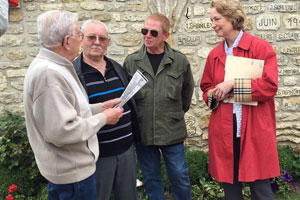 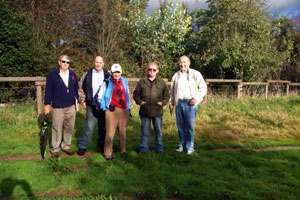 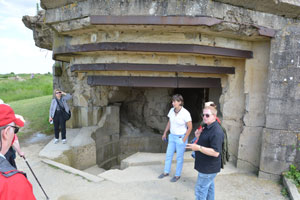 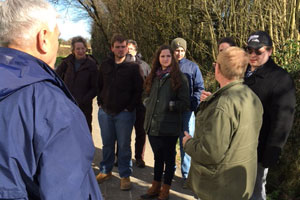 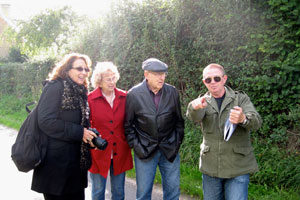 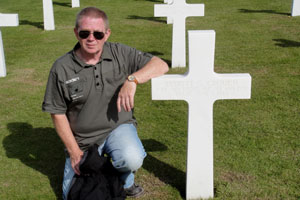 Today the event really begins. Breakfast, juice, croissant, pain chocolate, fresh coffee (or tea) is taken early as we look to leave the Manoir by 9.a.m.

Crash site of the DC-3

Firstly a short walk of only 40 yards will allow us to visit the crash site of the DC-3 and pay our respects to those brave airmen and paratroopers who died in the opening moments of D-Day.

Boarding our Battle Bus, from the Manoir we move just 2 miles to a small hamlet that was the site of a fierce skirmish between 82nd airborne troopers and a convoy of German soldiers. The airborne won!

Onwards to La Fiere bridge, described by L.A. Marshall (Chief Historian, European Theatre of Operations) as ‘the bloodiest small struggle in the experience of American arms’.

Walk with us over the few hundred yards that took so many young lives. Here you will see the exact locations of where many of the artefacts in our armoury were actually found.

Parking by the church we will take a few moments to remember that night when a stick of 18 paratroopers were dropped in error in the town square.
Falling amongst alerted German troops a heavy toll was taken of the almost helpless descending paratroopers.

First a stop by La Madelaine Church. Although badly damaged in the pre invasion bombardment it was later still able to be a place of prayer for the soldiers.

A drive up the coast road by the many gun emplacements and block houses of the Atlantic wall and on to the gun batteries at Crisbecq and Azzeville. These were enormous batteries that took until June the 9th to be completely silenced. However a walk around their amazing fortifications and defences does make one wonder how they were ever taken!

Then – home and prepare for the evening meal! Over another glass of something or other we can debrief to discuss the day’s sights and experiences.

After dinner we will go over the plan of campaign for the following day – and so to bed!

Once again a good breakfast to start the day off right and we move further south, through Isigny Sur Mer and down the coast road to the southern beaches.

Here an almost Herculean task of scaling the cliffs under fire was affected by the American Rangers. Despite huge losses they took the gun positions that had been thought to threaten the beaches – only to discover the guns were not in place.

Stopping at a small but none the less interesting museum of heavy to medium artillery, Spitfire engines recovered from the sea and numerous other weapons and memorabilia we move on to Omaha Beach.

The Normandy sea air can be bracing at the best of times but there is something in that air that makes one reflect how those brave young men ever managed to cross those hundreds of yards of sand under such murderous fire. Excellently portrayed in ‘Private Ryan’ those first 20 minutes of film footage bring home the horror that those young men faced and to whom for so many that short stretch of sand proved to be their last moments on earth.

A short walk from the car park and we see the moving site of the final resting places of almost 10,000 of those young men.

The new visitor centre is wonderful and thoughtfully placed underground, so as not to disturb the reverence required of this site.

The only remaining Gun battery with its original guns still intact, this fantastic series of bunkers is perched high on cliff tops and overlooks the sea. The battle for this battery was hard fought, opening fire at 06.05 the guns reach could extend to both Omaha and Gold beaches. Even after a terrific bombardment from the Battleship USS Arkansas and a French cruiser the guns continued to fire making the Headquarters ship HMS Bulolo retire to a safer distance.

Charging to within one mile of the battery the British cruisers HMS Ajax and HMS Argonaut, firing at point blank range, managed to knock out 3 of the 4 guns but the site was only finally silenced the next day when the German crews surrendered to British soldiers.

Then – finally home for the last time!

Your final night at the Manoir and after breakfast we shall wave you goodbye and hope that you will take with you many happy memories of your time with us – and of standing in the footsteps of those heroes.